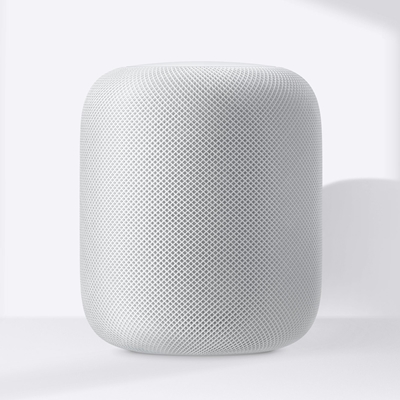 Sensors
See details
The new sound of home.
HomePod is a breakthrough speaker that adapts to its location and delivers high-fidelity audio wherever it's playing. Together with Apple Music and Siri, it creates an entirely new way for you to discover and interact with music at home. And it can help you with everyday tasks — and control your smart home — all with just your voice.

Deep bass with range you can feel.
The Apple-designed high-excursion woofer is positioned at the top of the speaker facing upwards, creating a wide range of deep bass that surpasses any traditional speaker. A six-microphone array, along with an internal bass-EQ microphone, analyses and compensates for the effect of the room on the bass response, providing rich, consistent sound. And a powerful motor drives the diaphragm a remarkable 20 millimetres, so the bass shines through even when the volume is low.

Far and away an incredible listener.
Six microphones positioned around HomePod allow it to pick up all the sound in a room. When you say "Hey Siri", advanced signal processing, together with echo and noise cancellation, allows HomePod to hear you without the need to raise your voice — even if you're across the room with loud music playing. After HomePod recognises the words "Hey Siri", what you say is encrypted and sent anonymously to Apple servers without being tied to your Apple ID.

High-fidelity audio that's all around you.
A custom-designed array of seven beamforming tweeters, each with its own amplifier, creates tremendous directional control. Placed around the base and using a folded-horn design, they send the flow of music towards the centre and then out the bottom in a 360-degree pattern, resulting in an all-encompassing sense of space. This virtually eliminates early table reflections and allows for consistent high-definition sound.

The biggest brain ever in a speaker.
An Apple-designed A8 chip orchestrates all the remarkable audio innovations inside HomePod. Like advanced signal processing so Siri can hear you over the music. Real-time studio-level processing that maximises the bass while minimising distortion. Buffering that's even faster than real time. And upmixing of both direct and ambient audio. You get amazing sound, every single time.

Designed to be seen and heard.
HomePod is wrapped in a seamless mesh fabric designed for aesthetic and acoustic performance. Available in white and space grey, it's gorgeous from every angle — yet virtually transparent to the sound waves passing through it.

Knows how to work a room. Automatically.
Setting up HomePod is quick and magical. Simply plug it in and your iOS device will detect it. Equipped with spatial awareness, HomePod automatically tunes itself to give you optimal sound — wherever it's placed. Pair it with a second HomePod to create an unmatched stereo experience. And bring multi-room audio to your whole home with AirPlay 2.

Wall-to-wall. Ceiling-to-floor. It's room-filling sound.
Place HomePod anywhere in the room. With spatial awareness, it automatically analyses the acoustics, adjusts the sound based on the speaker's location, and separates the music into direct and ambient sound. Direct sound, including the main vocals and instruments, is beamed to the middle of the room, while ambient sound is diffused into left and right channels and bounced off the wall. So the entire space is filled with rich, well-defined tones.

A stereo pair. A new dimension of sound.
A HomePod stereo pair works in concert to instantly create a wider, more immersive soundstage with a significantly bigger sweet spot than traditional stereo speakers. Each HomePod automatically detects its placement in the room and precisely adjusts the music in balance with the other, from the very first song it plays. A HomePod stereo pair not only creates more room-filling sound, but also provides great bass extension, with a deeper, more accurate reproduction of low frequencies.

Control music throughout your home with AirPlay 2. All from one room.
When you add HomePod to multiple rooms, the speakers communicate with each other through AirPlay. So you can ask Siri to play jazz in the living room and the Moana soundtrack in the kids' room — or to play the same song everywhere in the house — all from where you're standing. As you move around the house, your music can go with you — just tell Siri to move the song from one HomePod to another and you won't miss a beat. With HomePod, you can also control any of your other AirPlay 2–compatible speakers using just your voice.

The ultimate music authority.
HomePod is built to bring out the best in Apple Music.1 With the intelligence of Siri and access to over 50 million songs, it learns what you like and helps you discover more music you'll love. And that takes the listening experience to a whole new level.

50 million songs never sounded so good.
Apple Music unlocks virtually every song you can imagine. Stream anything in our catalogue along with music from your iTunes library. And friends connected to your Wi‑Fi network can stream their music straight to your HomePod. Don't have Apple Music? Try it free for three months and cancel anytime.

Learns the music you like, plays the music you'll love.
When you're really into a song, say "Hey Siri, I like this". Or if a particular song or genre isn't your thing, you can say things like "Hey Siri, I don't like electronic music". The more you tell HomePod, the more Apple Music learns your taste in music. Which means you can also just say "Hey Siri, play something I'd like" to hear your favourite songs, as well as new tracks similar to the ones you like.

Stream audio from more sources with AirPlay.
With AirPlay, you can play music from different streaming services, and audio from film, video, news, sport and audiobook sources.

Up next, your favourite podcasts.
You can stream anything from the over 500,000 shows available through Apple Podcasts. Catching up on all your favourites and discovering powerful new stories is as easy as asking Siri.

A helping hand is just a "Hey Siri" away.
HomePod is great at the things you want to know, and do, in your home. From getting the latest weather to sending messages and controlling your smart home accessories, Siri makes it easy to multitask with just your voice.

Home to an intelligent assistant.
Whether you need the latest traffic, news and sport or just want to set multiple timers for different tasks, Siri is ready to help. You can also schedule, cancel and stay up to date with your Calendar appointments. And now, when you're in the kitchen thinking about what to eat, you can ask questions like "Hey Siri, how many calories are in an avocado?" before you prepare to spread it on toast.

Make and receive calls on HomePod.
Just ask Siri to call a friend — or dial any phone number. And when you're at home, every incoming call to your iPhone can automatically be directed to HomePod by saying "Hey Siri, answer my iPhone".

This is how you command a room.
Just say "Hey Siri, turn on the lights" or "Hey Siri, make the room cooler". You can even ask Siri to set scenes, like "Good morning", that put multiple smart home accessories to work — all at once. Just add an accessory to the Home app, then control it with your voice on HomePod.

Accessibility
Accessibility features help people with disabilities get the most out of HomePod.

In the Box
HomePod
Documentation